Objectives of the Help Offset GWF

“The greatest power lay in subtlety,.., the recondite support and extension of natural processes.”

OBJECTIVES of the Foundation: to encourage the following

It was announced by the Bill and Melinda Gates foundation in December 2018 that they would finance research at Harvard into a Space Umbrella consisting of chalk particles shot into the upper atmosphere so as the reflect sunlight before it could warm the atmosphere or the earth. This illustrates their foundation’s great concern for our current trajectory of accelerated global warming.

This is the best solution physical and probably necessary within 30 years but our crude estimates are that it could cost trillions of dollars to maintain every year if the particles were sent from earth.   It also assumes that the quantity required would be something like the quantity of 22 million tons of sulphur particles thrown into space by Mt Pinatabu in 1994 that resulted in about 1 degree of cooling of the  earth for approximately 18 months. The lowest cost of shooting material into space from the earth is estimated at $20 per lb using technology get to be developed,  a giant electromagnetic gun embedded in a mountain. Technology that is not yet developed.

It would be a much lower cost if we used moon dust and fired it from the moon but such a weapon on the moon would give the operators possible world dominance so would have to be operated by many nations and handled with great political as well as technical skill. It might however greatly lower the costs of operation due to available cheap material and low gravity to overcome.

We think our projects will buy some time for this plan to be optimized and developed.

An article by the BBC gave a broad view of possible space umbrella ideas :

What is Old is New Again

There is nothing new about planning the use of below sea level areas. In 1912, the purpose then was to provide hydroelectric power with fresh water from the Nile to run into the Qattara Depression, in which the constant evaporation would mean that the flow and the generation of power could continue.

The alternate source of water for hydroelectric power would be the Mediterranean and a tunnel of approximately 55 to 80 km, whereas the freshwater proposal would need 200 miles or 320 km of pipe and would use potentially valuable freshwater to evaporate, the saltwater source would have the advantage of providing salt crystals to reflect sunlight and then be processed to capture or sequester carbon or to sell for other industrial purposes.

This depression alone covers an area of 19,605 square kilometers or 7,570 square miles. If we were able to use a significant portion of this area for evaporation, salt flat generation and salt production for the use of carbon sequestration then significant effects will occur. 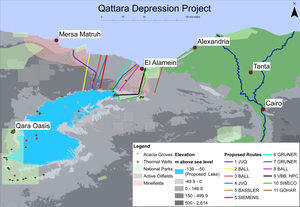 The Salt Flat Evaporation surfaces’ viability will be sufficiently proven possible by developing algorithms or computer models similar to computer weather models, which we will call the Offset Model. The model will enable a forecast to be made of the necessary area (number of thousands of square miles) and surface type to affect a significant temperature change.Initial calculations indicate that we will need 170,000 square kilometer or 6600 square miles of evaporation surfaces to make any significant effect on global temperatures.

A dominant contributor to cooling will be the water evaporation as the latent heat of evaporation pulls heat out of the hot air.

The reflective index of the salt crystals is another one of the variables in the model. Other standard weather variables including wind velocities at the surface level and the rate of saltwater input rates will play a part along with the dominant evaporation rates by area.